I have an unhealthy affinity for this show.  I like watching it, talking about it, reading about it and even writing about it.  It’s incredibly sad and I should be much more ashamed of it than I am.  If I put this kind of time and effort into my school work, my career or relationships I’d be a Nobel laureate who cured the rickets with a happy family that loved and respected me. Instead I’m just another asshole who works in finance, hates his job and writes embarrassing stuff on the internet before nuking a hungry man and shame jacking it to whatever’s trending on porn hub.  So, with the knowledge that with every post like this I significantly decrease my chances of ever seeing a real life woman naked again, let’s get to my season seven predictions.

Lets start with the most finite bit.  The thing that has made this show such edge of your seat entertainment.  The way that no one is seemingly safe and could go in extremely brutal fashion without much warning.  Obviously, thousands of faceless extras will go down but who cares about those pawns.  Here are the ones I think will leave us whose names we know.

I love that lady fucking badass but I just don’t see how her story can continue much further.  This is more of a narrative death than anything.  She has played a small but significant part in getting Dany over the Narrow Sea to Westeros and for that all of the viewers are eternally greatful that she has helped to rescue the Unburnt and her dragons from her Meereenese exile and hope that the send off they give her is worthy of her stature.  I mostly just cant see where her story would go from here and it seems like Theon lives only to see horrible things happen around him and losing the only person who gives a fuck about him would be a nice way to continue the torture Ramsey started.  Dudes gonna out live everyone. 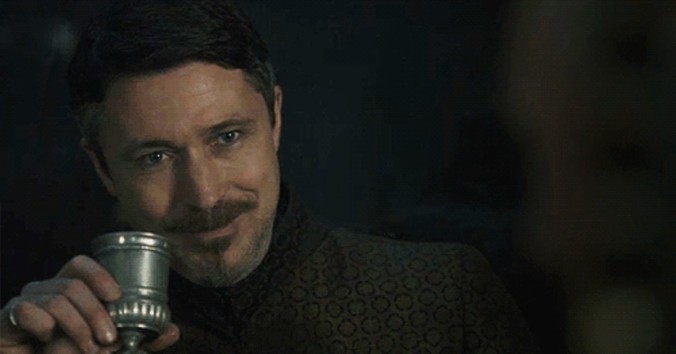 I feel similarly about this choice as with Yara.  I just don’t know how much more he can factor in as we inch closer to the end of this story.  He has had his hand in nearly every bit of treachery and backstabbing the show has offered and really started the entire series events in motion with his plot to poison Jon Aryn.  It seems to me that the remaining story will be about fighting and armies and the like and a schemer like that has no place on the battlefield especially now that the major players have been whittled down so far and there are only so many people left for him to double cross.  I think we will get most of the season with him and his ever changing accent.  Just long enough for him to causes problems for Jon and Sansa but I find it hard to believe that he could really cause any sort of lasting rift between the two as it would have to be in the form of manipulating Sansa and that would back track on so much of the character development we’ve seen from her.  She has started to become harder and understanding of how things work and to have the show let her fall back into this reuse she’s already fallen for feels like a disservice to the character.  Lord Peter has to go.

Surely more notable characters than two will see their ends but those are my two predictions.  Next, lets take a look at some business in Kings Landing.

Euron Teams Up With Cersei

This is kind of a layup.  There are really only two sides left here, Cersei and everyone else.  The everyone else already contains Euron’s niece and nephew that he has already stated he wishes to murder and he cant go it alone so of course he will make a trip to see the new occupant of the Iron Throne.  This one is a no brainer.

I’m taking a bit more of a chance with this one because she’s really all he has left.  As a character, he has made so much progress from where we first met him plowing his sister and throwing a child out a window.  All of the terrible things we have seen him do have all been done for one person, Cersei.  I think he finally realizes that maybe this is a toxic relationship and its time to see other people.  Who would have thought fucking your twin sister could have so many terrible consequences for you and those around you?  I think its possible he even kills her but don’t know if we will get that this season.  I think his desension will grow and even if he hasn’t had ‘the talk’ with her by seasons end it will be clear to the viewer where his feelings lie.

Now to some fan servicey predictions.

This one also is probably a no shit but I want to talk about it anyway so here we are.  These are our two greatest heros remaining and it would be great to see the two have a mini Targarynen family reunion.  I don’t think the interaction will be one where Jon is aware of his actual lineage but it should still be fun television to see the King of the North finally share the screen with the Mother of Dragons.

Arya Is Reunited With Nymeria

This has to happen.  It will be one of the biggest missed opportunities if it somehow doesnt.  Why else let the wolf live back in season 1 if not to have it play some sort of role going forward.  Just seems like too much of a loose end to not address at some point.  Also, the thing was released in the same general area of the world where we last saw Arya feeding that old shit his kids before brutally murdering him so lets just let this happen and give us a fun little moment in the midst of this hellish shit world that old fuck has created.

That leads us to my final prediction.

The Wall Comes Down

I think this happens at the end of the season, possibly even the final scene.  The White Walkers have to get past it eventually so something’s got to give.  The how is probably more of a prediction than the if and I do have a thought on that.  My guess is that it will be Brans fault.  We remember that his dumb ass got touched by the Night King which allowed him to enter the cave where they were previously safe.  I don’t think that undead tramp stamp has worn off so if Bran decides to head south of the wall that might just be their way in.  If so he really is the worst person in this series by default.  Maybe Jamie was right from the beginning.  Would really change the way you rewatch that pilot if true.

The entire series does actually take place inside the eye of a giant named Macumber h/t Nan.

So thats all I got.  I’m certain all of these things will happen and maybe even a couple more, who knows, but I will be recapping every episode and you better believe I will be insufferable every single time I get one right.  Can’t wait.