As I slowly emerge from my football induced tunnel vision and begin to look ahead to the next pointless sports related time suck I will be engaging in, I suddenly became aware of the fact that the 2018 MLB season starts on a Thursday and it’s taken me on a roller coaster of emotions.

My initial reaction to this nearly 6 month old news was one of channeling my inner set in their ways old man ass hole (without the racist subtext, obviously), ‘you can’t start the season on a Thursday!  Tradition! History! Change!’ and so on.  How could I possibly get excited about my favorite childhood sport starting on a god damn Thursday??  It’s unthinkable, unfathomable, unnatural even.  This was an injustice that I could not stand for.  As I prepared to take to twitter where all perceived grievances, legitimate or otherwise, are aired, I began to rethink this position.  The first reason being, this seemingly foolish change meant we wouldn’t get those ridiculous games on Sunday before actual opening day that always felt pointless and were really just an obvious excuse to get starving baseball fans to watch a Rays-Tigers game at 4 pm that they otherwise would have never even considered taking part in.  Then I realized that this also meant all 30 teams would be playing on the same day.  Instead of having your favorite team missing out on this should be nationally recognized holiday because they were stuck in the aforementioned Sunday afternoon/night cash grab from our friends at ESPN, you would be able to enjoy the event with everybody else, as god intended.  The only thing better than streaming that first batch of random day games on your work computer while pretending to do what you are being paid for is when your team is part of the reason to shirk those responsibilities.  It’s a beautiful, unproductive moment that is uniquely American.  As if those reasons were not enough, the most important thing that comes from this new Thursday start is that it moves up the time between now and when we get baseball that actually counts.  The start date is now March 29th which, as I’ve learned from the internet, is the earliest opening day in the history of the sport.  I know you will get those losers complaining about games being too cold and this and that but I could give a shit about that.  It’s still warm as hell on my couch, what do I care if half my squad is wearing mittens in the field?  Baseball that counts is baseball that counts, enjoy the gift and shut the fuck up.

Unless you’re this guy, I guess. 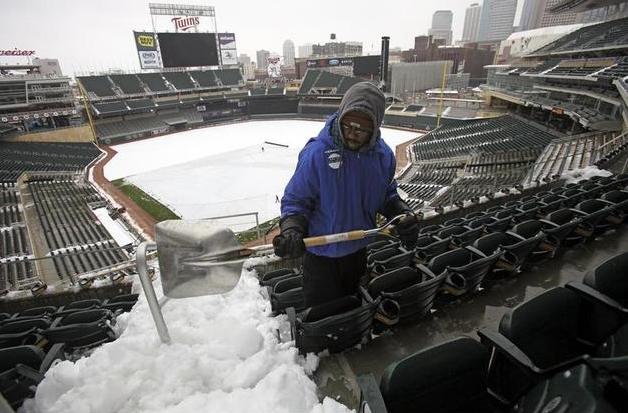 Anyways, lets recap.  It’s kind of weird that the season will be starting on a Thursday but now we lose the bullshit Sunday before opening day nonsense, every team will take part in the festivities AND we get it all earlier than ever before.

This is a win.  Here’s to hoping they start the season even earlier next year and we can eventually be watching baseball immediately following the Super Bowl.